This mural is 8 ft tall and over 200 ft long that includes art by the late artist Joseph Demarais, along with renderings of Huong masterfully put together to create one great work which is also interactive with the viewers. Most of the mural consists of artwork created by Joseph Demarais and Vietnamese Artist Huong, with special recognition to guest artists, scholars, and interns including Ann Demarais, Joan Wood, Sandi Wicina, Mary Liepold, Kevin Kirkwood, Renata Cuellar, Sofia German, Serafima Sokolov, Kyle Mickalowski, Glenn Ryals and Timothy Morrison.

In an effort to advocate peace through art via large visual murals, the Peace Mural Foundation captures moments when words fail. The primary purpose of the IM is to visually discuss different ideas,  arguments and historical facts on the subject of immigration, reform, and public opinion therein with the artistic assistance of Demarais' expressive work. Composed together into a wall exhibition in over 200 artworks by Joseph Demarais, an artist well known in many museum collections, paired with hundreds of quotes and slogans by scholars, advocates, lawmakers & enforcers, presidents and immigrants themselves.

The immigration mural delicately weaves in the voices of those who are directly affected by immigration policies.  It deliberately announces the current issues of debate on this topic that is rapidly becoming history.  With the IM, we start dialogue and deliberation amongst the public, whether they agree or disagree with immigration whether legal or illegal within a country or state. Although we advocate for peaceful and positive outcomes for all people affected by current immigration laws, we do not expect to change the law ourselves or push a certain viewpoint on anyone. It is up to you, the voter, to take in all the sides of the debate and make the final judgment yourself. We bring as many facts,  viewpoints, and images together to the public in one visual display in order to collaborate, discuss, revolutionize and generate solutions. Extending on the most important issues that have not yet been solved, the mural captures a part of debates relevant to immigration and displays it in a way that proves to be enlightening. 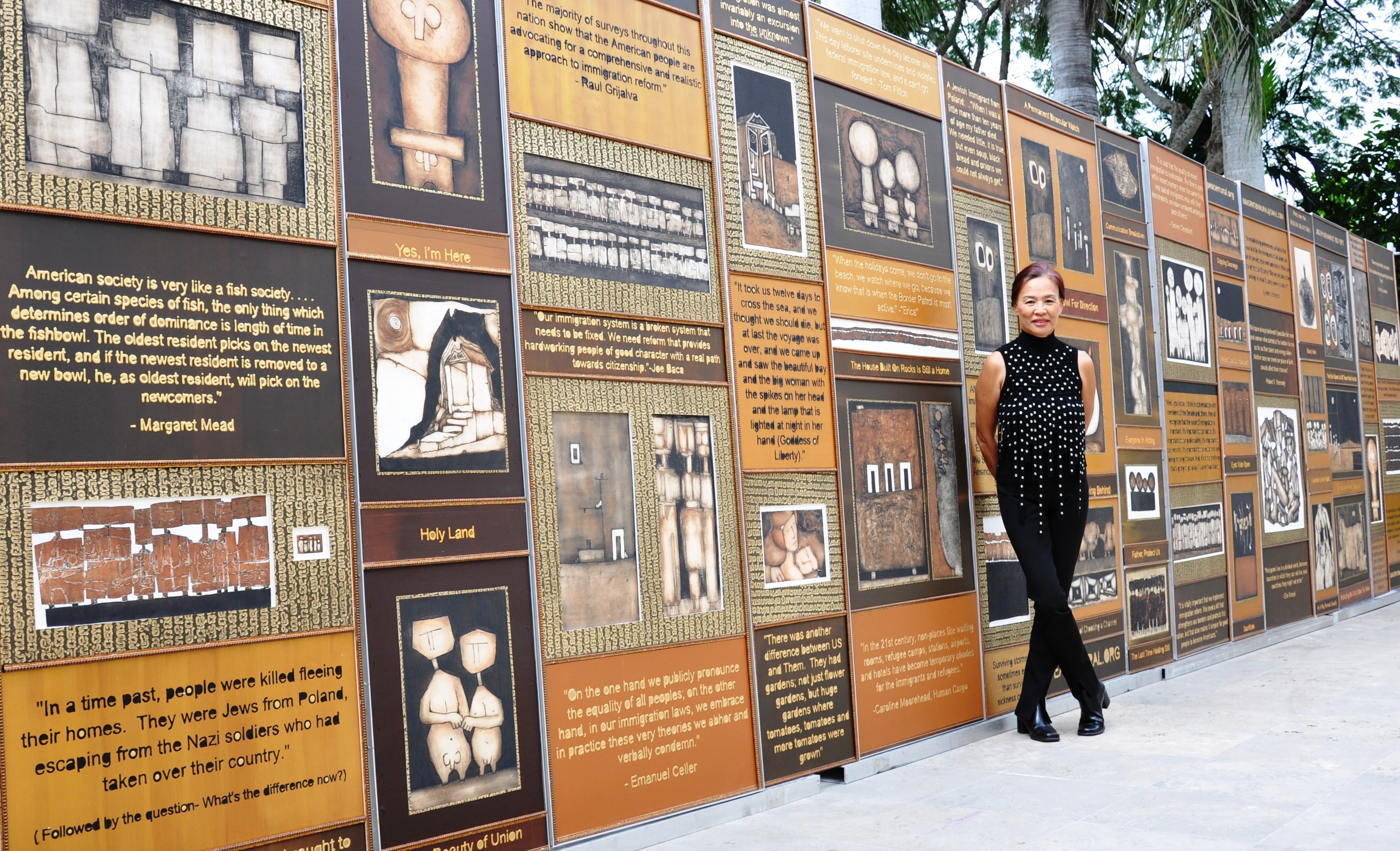 The Mural, whether its the Immigration Mural or a different portion of the Peace Mural always has and always will advocate for peace,  and nonviolent change for human rights and justice. “Peace is Communication”. The quotes were chosen to be included within the Immigration Mural act as quantitative additions that support the images by Demarais in their calm abstractness. The IM also is a part of the public. It tries with surmounting effort to communicate the message that everyone’s opinion is counted.  The mural recognizes all voices because ultimately the final decisions that policymakers decide comes from these American voices and this diverse immigration Nation.

As this is a current and important issue in our nation's history, we strive to add a spotlight in visual form to this significant and relevant subject at a time when different laws and bills are created weekly in different states of this country. Arizona and Alabama being current hotspots for the urgent issue with the most recent laws affecting thousands of individuals from all walks of life.

Demarais himself always advocated peaceful actions and human rights. Many of his admirers see his work as social commentary- figures representing faceless people, compositions representing people attempting to get together but still remaining apart. But Demarais himself said, “I'm not sure what my paintings mean. I tell myself that, as an artist, I am avoiding confrontation, but I'm sure that my art expresses at least my subconscious reaction to life and its events”. Using earth tones in his prints to create simple forms of people, windows, doors and lonely individuals in the darkness of night, many of his works can transmit the struggle and hardships of migrants. As a print-maker, Demarais specializes in intaglio relief.

This work has been nationally acclaimed, receiving sponsorship from the American Library Association to be shown nationally, and has been shown in a number of exhibits all across the US, including Washington DC and Las Vegas. This politically powerful art has already been displayed for Janet Napolitano and the Department of Homeland Security and for the National Council for La Raza, the largest Latino group in the country.

This inspirational work is by renowned peace artist, philanthropist, and Vietnam War refugee, Huong. We would like your help to spread awareness of immigration reform by coming to see the exhibit. We have toured around the country in our mission to educate the public on immigration and would like the opportunity to display it to our local communities. We believe it is our civic duty to combine efforts to spread education and compassion on human suffering.